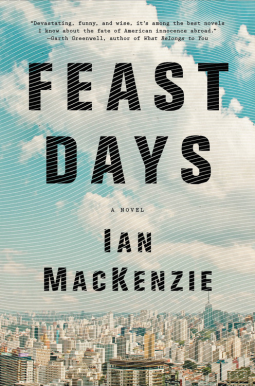 Feast Days by Ian MacKenzie is a novel about a young upwardly mobile couple transferred to Sao Paulo, Brazil.

He is an investment banker and she is trapped in a foreign country without much marketable skills or a visa that would allow her to work. The descriptions of Brazil are accurate. The division between the rich in their walled complexes and the poor in their shantytowns is very clear. Among the rich Brazilians, there is also a status competition. Emma, the American woman, works for friends teaching English. Having a tutor is a status symbol, even if one doesn’t really need one.

There is crime on the streets. There is corruption in business and government. There are protests and protests that turn into riots. Children of the rich are joining in the fight if not for the movement for the thrill. Haitian immigrants legal and illegal are protected by the parish priests and become the new outcasts giving the poor someone to target. A great deal is given to the division of the people and to the chaos of society outside walled complexes.

The most interesting thing I found and what kept me digging into the story is the narrator. The cover flap will tell the reader her name is Emma. You will only find her name once in the text. Her husband does not refer to her by name nor do her Brazilain friends. Perhaps she is just another American woman with no value except as a status symbol tutor or wife.

Perhaps he too is just another Yankee in a foreign country. There for a while then replaced with another equally forgettable person. This makes the book far more interesting to me than I originally expected. It added depth to the story that made it much more than just a story.

MacKenzie’s first novel was City of Strangers, and his fiction has appeared in The Gettysburg Review, The Greensboro Review, and elsewhere. He was born and raised in Massachusetts, graduated from Harvard College, and has lived in New York City, Ethiopia, and Brazil.

I do not review much contemporary fiction because it seems to be written for instant entertainment without much depth or lasting memory. Feast Days is something different.

This review of Feast Days was originally published on the Evil Cyclist.

Evil Cyclist is a vegetarian with an M.A. in International Relations, a and former Marine. Since then, he has left the corporate world to become a bicycle mechanic and wheel builder. He lives a car-free life in the suburbs of Dallas, TX and spends his spare time buried in books. Find him on Goodreads and Twitter.