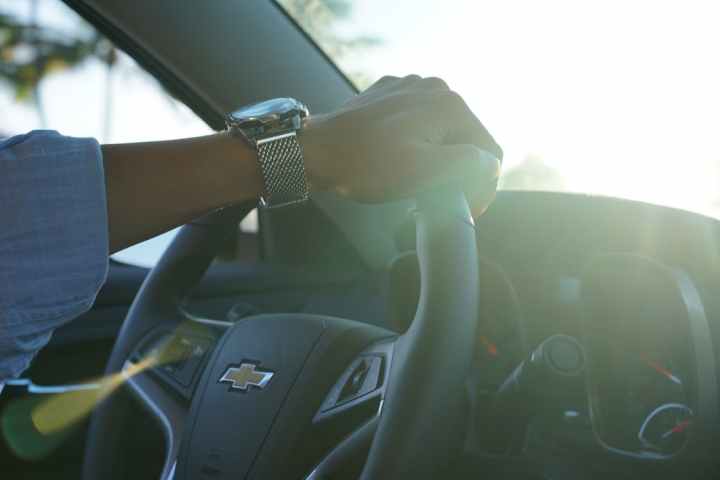 I pulled up the drive, stomach in knots. The back of my throat was coated with acid, making every swallow torture, every breath ragged. The air felt like it was made of heavy, bitter syrup and no matter how many blasts I took from my aspirator, my asthma wouldn’t let go.

I’d dreamed of this moment. Dozens – maybe hundreds – of times, since I was just a kid. I’d done everything I could to change the circumstances. In the dreams, it was always late in the day, at the edge of twilight; I’d left early, as soon as the sun was up, to be there before that. In the dream, I was always in an old red sedan, and to avoid that I’d rented a gray pickup.

Of course, the year-old and recently inspected truck didn’t make it up the trail. It blew a rod and died at the side of the road with no help in sight. By the time I’d gotten ahold of the rental company and had them come fetch me, the day was mostly gone. The car they brought as a replacement – apologizing the whole time, as it was the only one left in their fleet – was a red Chevrolet Cavalier.

I should have quit right then. Should have known better. But there was the sense that I didn’t really have a choice in this. That one way or another, the dreams were going to end today. Maybe it was pointless to try to resist the script that had been playing out in my sleep for the better part of three decades. Better to go with the flow.

Of course, the flow ended with a painful death, but at this point, that seemed unimportant.

Maybe that’s why I kept going. To be done with the onion-peeling, to be done with everything. I was tired. So tired. Not just of the dreams, of insomnia and headaches and nosebleeds and everything that went with them, but with life. One way or other, it would be done. I could put it all aside and be something else… or not have to be bothered by any of it at all.

I got out of the car, listening to the gunshot echoes produced when I slammed the driver’s door shut. The echo bothered me, but it took me a minute to figure out why. There was no response. No other sound. No little birds chirping, no bugs buzzing, no sense that the sound had disturbed any natural order that would otherwise be going about its business at the tail end of a sweltering day in July.

I could feel it. The house – or whatever was waiting for me inside – pulsing like a tumor in the landscape, a diseased heart sending whatever passed for its blood through the surroundings. Poisoning them, twisting them, making it unfit for anything that it didn’t allow to exist.

In that toxic heartbeat, I could hear it calling my name. God help me, I answered.

Without conscious thought, I walked towards the house, running my fingers along the smooth wood of the banister attached to the short steps leading to the porch. Despite the age, the length of time since someone had actually lived here, it was in good shape. No signs of rot, dust, or damage. No graffiti or broken windows, no cigarette butts and used condoms. Whatever aura the old place had, it was enough to keep the kids away.

I laid my hand on the brass doorknob of the stout wooden door, squinting, trying and failing to get a glimpse of what lay beyond through the frosted glass panes at the top of the door. The knob was cold, icy, beneath my hand. I felt that if I pulled my hand back and looked at it, I’d see a rime of ice melting against my palm. I didn’t try the experiment.

For a moment, I found myself hoping it would be locked. I knew it wouldn’t be, but if it was, I could be free. I could shrug and walk away. Despite following the madness this far, I wasn’t going to break a window or kick in the door just to sate my obsessions. That’s what I told myself, anyway.

It was a futile hope. The knob turned easily, without even a squeak, and the door slipped open like a mouth waiting to swallow me.

I couldn’t see what lay beyond; the clash between the darkness inside and the lingering bright outside left my eyes going spastic as they tried to decide which to focus on. Not that it mattered, anyway; I think the darkness was from something other than a lack of lights being on, and even if I’d thought to bring a flashlight it wouldn’t have made a difference.

Sighing, resigned to what was coming, I stepped through the doorway.

This story was originally published at KaineAndrews.com. Intrigued? Stay tuned for Part 3, next Thursday! 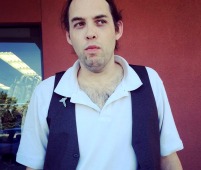 Kaine Andrews was raised in the wilds of Nevada, molded by NASCAR-loving witches, a Catholic school education and typewriter theft, granting a natural fascination with all things dark and dreary and demented scribblings. He currently resides in Oregon, where the omnipresent drizzle keeps him somewhat sane.

We've been hitting triple-digit temperatures in the desert now. Suddenly, I'm looking forward to leaving in a few days! 😹
I'm trying to take a nap hooman. What do you want now?? 😾